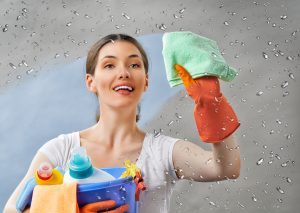 Some people use the terms disinfectants and antiseptics interchangeably. While they both essentially do the same job, they are actually two different things.

Antiseptics, on the other hand, are used to kill germs on human skin, in cuts, and other living spaces.

Naples Commercial Cleaning — Use of Disinfectants

Disinfectants are widely used in commercial and home cleaning. They typically are alcohol based, but there also are disinfectants that use bleach, hydrogen peroxide, and even iodine to kill bacteria on contact.

Each works differently to create the same result. Hydrogen peroxide reacts to produce free oxygen radicals, while chlorine-based bleaches are strong oxidizing agents that cause cell walls to disrupt and the proteins on the surface to become irreversibly damaged.

Nearly all disinfectants work instantly. Within a few seconds of spraying or swiping a disinfectant into a garbage can or toilet bowl, the germs and bacteria are quickly and efficiently killed.

Antiseptics are generally used on the skin, usually after it has been damaged by a scrape or cut. They are relatively new, having only been used widely starting in the 1870s when scientists made the link between bacteria and diseases.

Antiseptics are not usually used in commercial settings, with the exception of hospital and healthcare settings.

Sterilization kills or removes all living organisms, including bacteria and viruses, from an object. While it is essential for many medical procedures, in most commercial settings disinfectants are a better cleaning option.

At Silvana’s Touch Cleaning, we use a variety of disinfectants to keep your workplace safe and clean. Our safe, yet effective disinfectants kill germs quickly so you can enjoy a healthy, productive work environment.